Throw someone a lifeline, break the silence and talk

This week marks not only Time to Talk Day on 4 February, but the launch of a new mental health awareness film.

Created by Tribe for the Port of London Authority (PLA) we’re delighted to be part of this project. Led by David Mansell, Lead Creative Consultant at Tribe Culture Change, we caught up with him and Stuart Pollard, Head of Health, Safety and Wellbeing at the PLA  to find out more…

How did the film come about?

Stuart: As a nation we are hearing of many people suffering with emotional exhaustion and fatigue as a result of the pandemic. It’s one of the reasons we are promoting caring throughout this time and this mental health approach across our business is really starting to take off.

Our mission is to ‘care, comply and challenge’. In other words, we look after our people, we do the right thing and always look to improve. This film forms part of that mission.

The maritime industry is traditionally very male orientated and men aren’t typically known for being great at talking about their feelings. Acknowledging vulnerability can be viewed as a weakness. I knew it was time for us to do more to support our people.

What was the aim of the film?

David: The film’s core message is ‘don’t be afraid to speak up’. We wanted to help overcome the stigma of mental health. In the not-too-distant past, when we heard about someone suffering with their mental health, we might of assumed they has some sort of condition. But it’s not like that anymore, we understand that anyone can have a bad day, things can get on top of us. It’s when we bottle stuff like that up that things can escalate. That’s what we are trying to do in the film, demystify the issue – and make it easy for everyone to get involved, to give them the confidence to speak up themselves and to support and listen, to help others…
to throw someone a lifeline,  break the silence and talk.

How did you go about creating the film?

David: We have worked with Stuart on various project over the years, not just at PLA . He’s passionate about making safety & health messages truly memorable and engaging, so he knew we would be able to help him deliver this project.

We decided to create the programme as a short documentary that would explore how people can get involved in the issue from a layman’s point of view.  So we needed to find a presenter that viewers could relate to and Gary Wilmot came to mind. People will know him as the, cheeky chappy, from stage and TV, always smiling and laughing and we knew that this was a cause he was keen to champion. 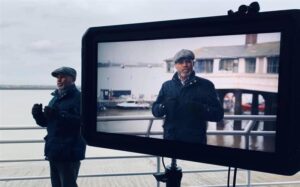 He came to the PLA’s Gravesend headquarters to find out about their new mission. Similar to Tribe’s ‘Activate, Motivate, Cultivate’ three-stage approach, we wanted Gary to find out why the PLA has taken this approach, how they are getting people involved, and how they plan to sustain it for a safer and better future.

People are talking about health, safety and wellbeing more than ever before and we are proud to be part of this film. Find out more about Port of London Authority, Time to Talk and Neil and Jonny’s mental health charity, ‘Beyond’.

Please take a moment to watch the film and consider how your organisation is including mental wellbeing in your culture programme. If you’d like to talk to us, we will listen.

About the Author: Clare Solomon