VR: engage the Rightway on health, safety and wellbeing

For an optimist, the modern, large-scale construction project presents an exciting melting pot of different cultures and best-practice. For a pessimist, this agglomeration of myriad contractors, subcontractors, and head-office management can sometimes result in conflicting messages – especially when it comes to getting the job done safely and healthily.

This prospect of mixed messages was one Tideway were keen to avoid. Instead, they favour a more unified vision of a safe and productive workforce, as Tideway and its partners deliver the Thames Tideway Tunnel – more commonly known as London’s new super sewer, tackling sewage pollution in the River Thames.

Laura Bromley, health, safety and wellbeing engagement lead at Tideway explains the origin of the challenge:

“We didn’t have any sort of behavioural programme within the Tideway team who run the programme and manage joint venture contracts with our partners. Our client team had very little exposure to behavioural science and why it’s important.”

So the challenge was to build something engaging for their in-house client team, that complimented the health, safety and wellbeing ethos of Tideway, as well as the key messages from the project induction:

“We decided that the best thing to do was for our joint venture teams to continue delivering their own programmes; something they’d built over years and years. But we wanted to make sure that our own health, safety and wellbeing approach didn’t give out mixed messages, or clash with whatever they were telling their people. We didn’t want to undermine that. It wouldn’t be right, because we’re all working together.

“So we needed a new approach, consistent with what people on-site were being told, but better suited to the office environment our people work in.”

We wanted to be different

Laura explains the original brief that they put out to tender:

“Behavioural science has been mainstream for a while now – many people will have seen or heard of it before in previous organisations. So we didn’t want to just repeat that. We didn’t want your usual ‘sit in front of a PowerPoint all day’. We wanted it to be interactive – to give people an experience they’d think back on, and a message that was long-lasting.

“The goal was that someone from the office team should have the skills and confidence to be able to speak up and intervene if they saw something both in the office and on-site, and intervene in a way that had a positive outcome.

“We wanted clever ideas, new ways to engage with people and make it relevant in their everyday work.”

Tribe responded with a proposal to pioneer virtual reality (VR), alongside other tools and techniques, as a vehicle for engaging people on health, safety and wellbeing. VR technology exploits novelty to capture their imagination, yet frames learning in contexts they already feel familiar with.

“It was quite a challenge – to do something that had never been done before. But with the VR elements that Tribe were suggesting there was something completely new and really fresh.”

VR as a practical tool for training

“In a typical training session everyone puts a headset on, then suddenly you’re transported to one of the famous London landmarks where we work, meeting people who work for Tideway and hearing how they feel about it.

“VR’s a good discussion starter, very thought-provoking. And this isn’t just safety, there’s a lot of health and wellbeing in there too – especially mental health and how that has long-term effects.

“I think VR is radical technology. The biggest challenge is that nine out of ten people won’t have used it before; it’s alien to them. And if they don’t like it, that can put people off for a long time. It can scare people away from your message, as well as the tech.

“So we’re very mindful of that when we develop content with Tribe; that there’s going to be confusion around using the VR kit, how to put it on, how to enter and exit the virtual world. So the content is very welcoming, and introduces them gently and simply to this whole new world.”

The current VR content is called ‘Journey on the Right Way’ which is a one day introduction to behavioural science using ‘Right Way’ – Tideway’s ethos for what they want to achieve, and how everyone at every level shares responsibility. Soon they’ll be piloting ‘Leading the Right Way’ for leaders and rising stars, which explores what they can do as figures with influence.

“I think once people get to grips with the kit, they’re quite excited about using it. People here are asking what we’re going to do next with VR because their first experience was so memorable. They don’t want it to stop there, and nor do we. 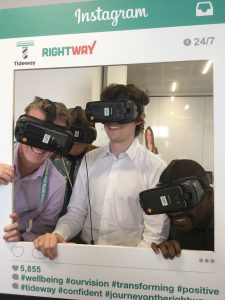 “Because we regularly catch up with Tribe, there’s also a lot of feedback on latest developments on the market – what other people are doing with VR, what can we borrow and innovate ourselves – to keep people engaged. We want to keep building our courses; the last thing we want is something that stays the same for five years. It has to grow and develop along with the project. That’s where close engagement with a partner like Tribe comes into its own.”

The best of both worlds

Laura has insightful advice for anyone looking to enhance their culture with innovative ideas, yet retain all the tried-and-tested knowledge that accumulates within communities of people who collaborate on large-scale projects:

“I think one of the key parts in all this was learning from what had gone before. And I think without engaging people from different areas, right at the start, I think we could have gone steaming ahead and implemented what we thought was a good idea. When actually, until you learn from what other players are doing in similar industries, you realise, we need to do this differently.

“The other thing is to not just stop at success. You’ve got to branch into other developments, to support your main efforts. A lot of work needs to go on around your core message, to keep hammering it home, to keep it fresh in people’s minds and long-lasting. We’ve got people who did the VR training in summer and we’re already refreshing those messages to keep it front of their minds.

“Another advantage of using something cutting-edge like VR is your ideas and messages have to keep up with the technology – it forces you to be innovative about what you’re saying.

“You need that balance of what has and hasn’t worked before. For us it’s been ‘let’s take what we’ve learned and now let’s raise the bar’, with VR, so we’re setting that bar for others after us – probably to raise it even higher. Within the construction industry in general – that’s what everyone is striving to do.”

About the Author: Tribe Culture Change